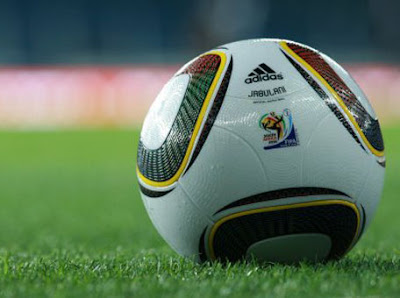 The grief you get
for every hitch and skip
you make, the way you flit
from strikers’ boots
and keepers’ clumsy mitts.

We hold our lead (and breath)
through every late-game
corner, praying only this:
one honest path tonight
from boot to Kingson’s rising fist.


"Jabulani" is part three of our impromptu tribute series to the Black Stars. Though the Black Stars' run is now over, we will keep posting new poems until July 9th. If you would like to contribute a tribute poem, send it to oneghanaonevoice(at)gmail.com.

What a nice piece!
The Jabulani indeed makes a very nice subject for a poem and it was handled masterfully here by Rob.
I guess some; if not most, of the clumsy misses from kicks at point blank range of empty nets came out of the erratic temperament of the Jabu. The Jabulani has caused some awful goal-keeping flaws even among some competent goal keepers including Kingston and Enyama.

Ironically, while some bemoan their loses and nurse imaginary and real wounds caused by this mischievous Jabu, it also conspired with the god of soccer and brought much joy to other teams and their numerous fans.

I agree with Rob. We need more of that in our next record making encounter of the Black Stars of Ghana and Uruguay.

The Jabulani has indeed generated a lot of controversies among not only the contestants of the ongoing FIFA 2010 World Cup in South Africa, but also all football fans all over the world. FIFA has actually promised to look into the claims in conjunction with the manufacturers after the competition.