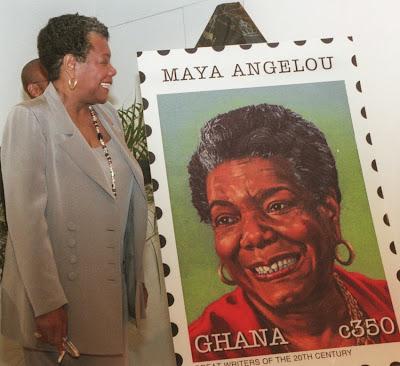 Thus she had lain
sugercane sweet
deserts her hair
golden her feet
mountains her breasts
two Niles her tears.
Thus she has lain
Black through the years.

Over the white seas
rime white and cold
brigands ungentled
icicle bold
took her young daughters
sold her strong sons
churched her with Jesus
bled her with guns.
Thus she has lain.

In September of last year, we released the results of seven years of polling up-and-coming Ghanaian poets on the question "Which poets have most influenced and informed your work?" The answer, loud and clear: Kofi Awoonor and Maya Angelou. What a shock it has been to lose them both in the months that followed. And what a challenge to the next generation, required now to do their best to fill this gaping hole. But we have their poems still, thank goodness.

While not born in Ghana, in the early 1960s Angelou lived in Accra, where she was an employee of the University of Ghana's School of Music and Drama, the features editor for The African Review, and wrote for The Ghanaian Times. It was in Accra that she met Malcolm X, with whom she returned to the United States in 1964, her life and writing forever shaped by her time in Ghana. And, as it turns out, Ghanaian writing forever shaped by her.

In our poll, Angelou's name came up more often as a poetic influence than any other North American artist, and (by a wide margin) more than any other female artist. Angelou's was one of few modern, outside voices to penetrate Ghanaian poets' consciousnesses, and virtually the only female voice.

Let this reality be a challenge to North American writers and female writers alike, of course, but more essentially, let it be a challenge to all of us as readers and champions of new writing: to make space for outside voices, still often drowned out. To allow the new, strong female voices of the following generations to rise. When you think of Maya Angelou in the coming days, think too of female Ghanaian poets writing now. Think of Edith Faalong. Think of Vida Ayitah. Think of LS Mensah. Aisha Nelson. Emma Akuffo. Juanita Tsikata. Mariska Taylor-Darko. Nana Yeboaa. And on. And on. Think of them and celebrate. This, more than anything, seems like a great way to honour Maya Angelou's legacy today.

You may write me down in history
With your bitter, twisted lies,
You may trod me in the very dirt
But still, like dust, I’ll rise.

Does my sassiness upset you?
Why are you beset with gloom?
‘Cause I walk like I’ve got oil wells
Pumping in my living room.

Did you want to see me broken?
Bowed head and lowered eyes?
Shoulders falling down like teardrops,
Weakened by my soulful cries?

Does my haughtiness offend you?
Don’t you take it awful hard
‘Cause I laugh like I’ve got gold mines
Diggin’ in my own backyard.

Does my sexiness upset you?
Does it come as a surprise
That I dance like I’ve got diamonds
At the meeting of my thighs?

Out of the huts of history’s shame
I rise
Up from a past that’s rooted in pain
I rise
I’m a black ocean, leaping and wide,
Welling and swelling I bear in the tide.

Leaving behind nights of terror and fear
I rise
Into a daybreak that’s wondrously clear
I rise
Bringing the gifts that my ancestors gave,
I am the dream and the hope of the slave.
I rise
I rise
I rise.