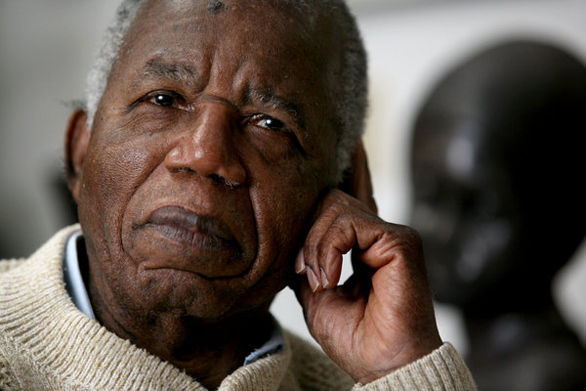 Born on November 16, 1930 in Ogidi in Anambra State, Nigeria, Chinua Achebe was the quintessential African novelist. He was the gold standard for the expression of Africanness. He was a brazenly unapologetic advocate for African cultures, traditions and linguistics. Achebe mounted his defense of the African way of life from a microcosmic platform: by showcasing his own Igbo heritage. In his writings, he was not Nigerian. He was Igbo. Of course, he was older than the new country carved by Lord Luggard and his wife, like bread on their breakfast table. That was his own dilemma: he was a man born into the sacred autonomy celebrated by his Igbo people and the nation that was a fusion of other tribes with other ideas. This permeated his writing. Achebe questioned the interruption of African life by the West through church missionaries and merchants. His books were always exposing the open schism that had been wrought on Africa tribes by the introductions of totally alien ideas.

As novelist, poet, professor, and critic, Achebe excelled beyond expectations. He singlehandedly shattered the condescending attitude that several Western writers and critics had for African literature. He pointedly eviscerated Joseph Conrad’s Heart of Darkness in these now classic words:

"Although he’s writing good sentences, he’s also writing about a people, and their life. And he says about these people that they are rudimentary souls… The Africans are the rudimentaries, and then on top are the good whites. Now I don’t accept that, as a basis for… As a basis for anything." (from Achebe's lecture "An Image of Africa: Racism in Conrad's "Heart of Darkness", University of Massachusetts Amherst, 1975)

For Achebe and African writers of his caliber, Africans and their experiences were equal and tangible like that of any other people in the world. We have histories. We have heroes. We have heritages. We have ideologies. We have thinkers. We have everything that any other human group has (and has ever had). That was an important stance in African literature because it represented a segue into self-definition. It was now the responsibility of African writers to portray their world from the inside out, which was more authentic than any opinion written by Western writers, who had no idea about what they wrote about Africa and Africans. It is believed that Achebe’s brave and essential scolding of prejudiced Western writers, like Conrad, cost him the Nobel Prize for Literature. Like any man sure of who he was, he said

"My position is that the Nobel Prize is important. But it is a European prize. It's not an African prize... Literature is not a heavyweight championship." (quoted in Quality Weekly, 1988)

It is important to note that Achebe’s magnum opus, Things Fall Apart, was an eerie prediction of the Biafra War, an event that left an indelible blot on the history of Nigeria. The war was like the schism in the tribe in Things Fall Apart. People with divergent views on authority and autonomy (in that nation) were fused together, resulting in conflagration. The war had a lasting impact on Achebe, lasting on his mind till he passed in March 2013. Even his last work was titled There Was a Country: A Personal History of Biafra. It is filled with those painful memories of a country in the birth pangs of the formation of its identity.

It would be hard for any writer to replicate what Professor Achebe did with his literary life. Here was a man who managed to deftly use the English language to define a non-English experience in such a transcendental way that his works became required reads all over the world. Here was a writer who, at the age of 26, was able to write what, in my opinion, holds a rank in the top ten books of all time. Achebe's prose was so powerful that it eclipsed his equally salient poetry. He wrote most of his poems in Igbo. One of them, "A Wake for Okigbo" (a eulogy for the seminal Nigerian poet Christopher Okigbo), was translated by Ifeanyi Menkiti. It is considered to be one of the finest showcases of Igbo dirges. In an eerie foreboding of his own death, Achebe mourns, in the poem, that:

The dance ends abruptly
The spirit dancers fold their dance and depart in midday
Rain soaks the stalwart, soaks the two-sided drum!
The flute is broken that elevates the spirit
The music pot shattered that accompanies the leg in
its measure
Brave one of my blood!
Brave one of Igbo land!
Brave one in the middle of so much blood!
Owner of riches in the dwelling place of spirit
Okigbo is the one I am calling!
Nzomalizo!

However, in all his brilliance with his own tongue, Achebe found it imperative to write in English. It was important to send Africa’s stories to the four corners of the world through the most commonly used linguistic vehicle. He opined that

"For an African writing in English is not without its serious setbacks. He often finds himself describing situations or modes of thought which have no direct equivalent in the English way of life. Caught in that situation he can do one of two things. He can try and contain what he wants to say within the limits of conventional English or he can try to push back those limits to accommodate his ideas... I submit that those who can do the work of extending the frontiers of English so as to accommodate African thought-patterns must do it through their mastery of English and not out of innocence." (quoted in Understanding Things Fall Apart by Kalu Obgaa, 1999)

Undoubtedly, Achebe was Africa’s father of literature. As editor, he paved the way for writers such as Ngugi wa Thiongo. There are few African poets and writers of note who do not ascribe inspiration to him. In the constant redefinition of Africa and Africans, his approach, as an individual and literary figure, is needed. He did not allow outsiders to control the narrative of his own people. He did not write to fit into an expectation or assumption of how and why African writers write. He wrote his story his own way. He wrote his poems for the ears and comprehension of his own people. His insistence of preserving who he was, regardless of pressures and influences, gives a valuable lessons to those who seek to walk in his footsteps. His death has left a vacuum but one that he will be happy to see that many African writers are working so hard to fill.

I dare to use to his own words, from "A Wake for Okigbo", to mourn him:

Owner of riches in the dwelling place of spirit
Achebe is the one I am calling!
Nzomalizo!

Prince Mensah is a contributing editor and frequent contributor to One Ghana, One Voice. You can read more of his work here.