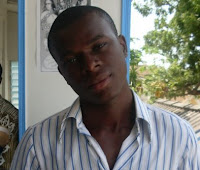 Martin Elorm Dogbo was born at Accra New Town, erstwhile Lagos Town, near the Kwame Nkrumah Circle in Accra, Ghana. He has been moving from one region to the other due to the peripatetic nature of his job. So for, he has worked in four regions in Ghana and he is hoping to go beyond that.

He completed a degree in Journalism from the Ghana Institute of Journalism (GIJ) in 2009. He then worked at the Ghana Broadcasting Corporation (GBC) in the Central Region as a part-timer from July 2008 to January 2009. He next worked with the National Media Commission (NMC) as a media researcher and monitoring officer.

With his poetry, he hopes to achieve change and also to give insight into real life situations, particularly in the Ghanaian environment.

1. Can you explain the Dipo ceremony for our readers not in the know? What inspired you to write about it?

The Dipo is a chain of ceremonies that mark the passage of girls into womanhood. It is practiced by the people of Krobo, in the Eastern Region of Ghana. The ceremony or ritual has been in practice from an eon and has not lost its popularity despite the plethora of destructive criticisms leveled against it. At the beginning of the Dipo, each girl enters a ritual house, doffs her clothing, and is dressed partly naked by her ritual mother. The morning after shaving their heads, the girls carry their calabashes to the river to bathe. The washing ceremony is a purification rite to cleanse the body and spirit. This is followed by a ritual bathing, after which the girls are fed a special meal made from yam and palm-oil sauce prepared by their mothers. The beads, a highly cherished jewel of the people of Krobo, are worn around their necks. At the end of the ceremony, the Krobo girls dance for the chief together with other royals, relatives, and, most importantly, prospective suitors who gather to admire the exhibition of feminine grandeur and beauty. This is followed by other activities. Despite the influence of the Christian church in Ghana the Krobo people consider the Dipo ceremony their most sacred and cherished ceremonial tradition.

I was inspired by the awareness of the drowning of our rich and beautiful Ghanaian culture.


2. Do you think of this poem as being written primarily for people already familiar with the dipo ceremony, or as an introduction to it for the uninformed?

Even though I see it as a combination of both, it is more as an introduction to the uninformed, and most importantly as it is axiomatic that Western culture is gradually eating up the Ghanaian local culture.


3. The simple refrain in the poem, "Weep not / African child / Smile not", is striking. Was it the first part of the poem to come to you, or did it come along later in the writing?

It was the first part of the poem. Well, it is for two reasons: first, with people normally considering laughter or smile as a paucity of seriousness, “Smile not" is a warning seeking to enforce seriousness as the ceremony goes on; “Weep not” is to convince the persona not to cry (or be sad) since Dipo is not a bad practice at all.


4. It's been almost two years since we last heard from you. What has kept you away, and how have you been doing in that time?

I know and I apologize sincerely for that. Journalism, my profession, has been one of the reasons. The other is I am trying to write political prose and poems. These entail careful observation and much time.


5. On an unrelated note, how have you been enjoying the World Cup so far? What do you think of Ghana's chances?

It has been a quite unputdownable to me because a lot of my predictions and analyses have come to pass. Ghana to me, is the best team in Africa, and I think it is the hope of Africa as well. Ghana has come too far to return with nothing.

This is another well written poem. I love this poem for many reasons; ranging from the beauty of the colourful Dipo Ceremony itself in particular; to the exhilarating milieu of the divers indigenous African cultures as a whole. But its thematic preoccupation comes foremost. The premise on which the poem is built is very dear to the heart of all Ghanaians, nay, all Africans, as the case may be. The poem aptly laments the irony of culture erosion due to western influence but it also extols the tenacity of the people of Krobo who still hold on to this colourful ancient ritual even till today. Indeed, just like female genital mutilation not all other ancient customs were that lucky to have withstood the onslaught of bitter criticism from outside and within. It is rather pleasing to know that not all African mores are that bad. Culture is the totality of a society’s idiosyncrasies which find expression in the shared pursuits within a cultural community, demonstrated in a variety of festivities and life-celebrating events. A society that loses its cultural identity would surely lose track of the present and jeopardize its future.

Of course, there are some ancient African traditional practices that can truly be regarded as anachronistic, unduly exploitative and remain stubborn sores on the face of humanity. We should however endeavour to jettison the ones considered as infringing on other people’s rights. Where one person’s right ends is where another person’s freedom begins. That is at least putting it succinctly like a paraphrase of or an interpretation of the view on freedom once expressed by the late U.S. Supreme Court Justice Oliver Wendell Holmes, Jr., when he said: "The right to swing my fist ends where the other man's nose begins." Well done, Elorm.